Truly Inspirational - How a Nine Year Old's Blog is Making a Huge Difference. 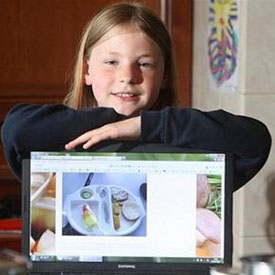 This Blog Neverseconds has gone Viral.  It is a fascinating little blog written by a inspirational and intelligent 'Young' lady.  Martha Payne is 9yrs old and has been described as 'The unsquashable school meal crusader'.
My Grandmother was a Manager of school kitchens in the sixties and seventies.  She had a no nonsense approach to cooking and like many from that era could make an tasty, healthy meal from not much at all.  Quite frankly in the UK school meals need an awful lot of work on them.  Euan enjoys a school lunch once a week.  He goes for 'Roast Dinner Day'.  This was his own idea and he only wants to go once a week, for the rest of the week he takes 'Jam' Sandwiches.
Martha had the idea of photographing and blogging her school lunch daily and it has caused quite a stir.  It was really enlightening for me to see the photographs of the typical school meals.  Martha is not rude about her school meals but as you flick through the blog you can see there was much room for improvement and over a few months Martha's school have made considerable positive changes to the school meal provision.  Martha has 'stuck her neck out' and gently challenged the grown ups to make these changes.  Another aspect to her blog is linking globally with other children and students who have photographed their lunch to be featured on the blog.  It is fascinating to compare culturally and nutritionally the differences in content, nutritional value and cultural attitude for each lunch.
Martha also has a 'Just Giving Page' where she wanted to fund raise for less fortunate children abroad who do not get school meals or meals at all.  Martha had the goal at aged nine, to raise £7000 to build a kitchen to feed other children.  She has now raised £60 000 and it is rising fast.  Watching the Visitor Counter on her blog is fascinating it changes faster than a digital timer.  An amazing young lady, with and amazing blog, making an amazing difference!  Go and take a look it is truly inspirational.
Posted by Inthesky at 13:31