Benefits Of Riding A Bicycle 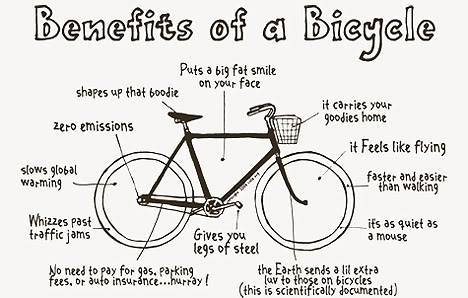 This morning I was awake ridiculously early for a Sunday.  6am!  Daisy the Chicken decided she wanted to play at being a cockerel!  She was doing a great job.  I ran up the garden to let her out early thinking that the blue sky and sunshine was making her honk for freedom.  Nope!  She still kept on 'honking' really loudly.  You know I love my 'Backyard Chickens'.  I think Chickens make great urban 'Pets with benefits' but 6am!     I scanned the garden for issues...cats lurking...to see if anything was upsetting her...nope.  I scattered food to take her mind off her honking ...nope!  I chatted to her...nope.  I picked her up for a cuddle...nope.  As soon as I put her down again more honking.  Some freshly picked raspberries and blackberries temporarily shut her up.  She looks well with no obvious injuries...she just wanted to make some noise.  When her 'sister' Poppy (Top of the pecking order), had finished laying, Daisy shut up!   I live in the middle of an old 1950s Council Estate in a fairly busy street.  I have some inconsiderate neighbours that are pretty noisy and we regularly/daily have dogs barking and howling...may as well add my chickens to the mix.  It is just unusual for them to be so loud, for so long and so early.  The Poultry books definitely did not mention chickens being a noise issue!  If they did I must have skipped that page!  I can be pretty blinkered and only take in the good bits!  Chickens are perfectly quiet pets for 99% of the time but for that 1%  boy oh boy do they make some noise!   I have shown you this photograph before, here is a cross chicken! 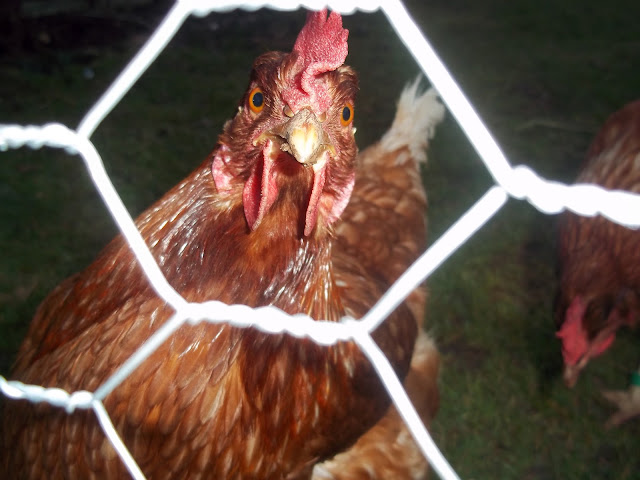 That is Poppy, with Daisy in the background, those two stick together like...'birds of a feather'.  Rose is the 'Winnie the Pooh' of chickens and likes to do her own thing and generally 'thinks outside of the box'.  She seems to prefer human company. 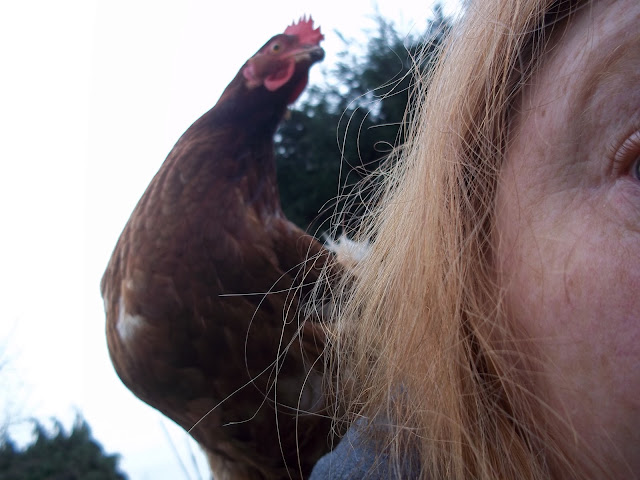 Rose likes to jump on my back and stand on my head or shoulders so she can get a 'birds eye view' of the gardening.
Having been unceremoniously raised from my slumber, early on a Sunday morning, I decided as the sun was shining and the sky was blue I may as well do an early morning bike ride.  Another benefit of riding a bicycle is it can be used to redress over indulgences like 'Chinese Buffets'.  I am still repenting for that 'Chinese Buffet'.  The day before we 'celebrated' Henry's exam results with a 'Mixed Grill' and wine (not conducive to being a good 'Weight Watcher').  He passed, with good grades and will be heading to 'sixth form' to study for 'A' levels.  That should keep him out of mischief.  We shall see.
I can't believe how early it still is!  I have legs of lead and the chickens are now snoozing in the garden.  They sprawl out like dogs and sleep in the sunshine.  I might go and honk at them...
Hope you are all having a good weekend.  :) xxx
Posted by Inthesky at 09:25