Here I know all about Pi Day.I did not know March the 14th was officially Pi Day.  I did not know there was a 'Prince of Pi'.  Now I have read Wikepedia a whole new world has been opened up to me.  Ha! 'A Prince of Pi', well doesn't he sound like my type of guy?  I thought he looked rather cool too, until I found out he was into numbers in a big way!  People who are into numbers scare me!  People who put numbers on their Pie scare me even more.  I prefer cream on my pie not numbers!

'Friday Pie Day' has had to be moved forward to today in honour of 'Pi Day'.  I have very nearly missed it too!  You are supposed to celebrate this official holiday with pie eating and discussing 'Pi'.  I cannot find anyone interested so I have had to tell you about it instead.  Then I have let Wikipedia do the explaining because quite frankly I never understood 'Pi' at school, I switched off altogether.  The only Pi I liked in school was in the canteen, a bit of 'Cheese and Potato Pie with Chips and Gravy' in the good old days before health fads when nobody cared if kids ate chips and gravy every day!  Happy Days.
My Pi Day Pie is . . . . as promised. . . drum roll please. . . my first ever. . .
I really thought you would be hard pushed to make a tastier Pie than Cherry or Apple, but my word, Blueberry Pie, made with fresh Blueberries is the 'Mother of All Pies'. 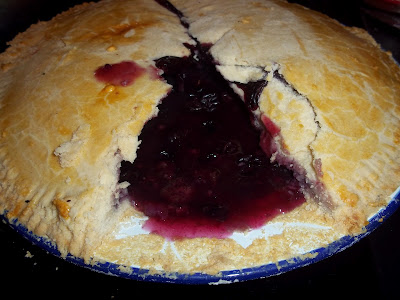 I used shortcrust Pastry
300g of blueberries covered with water and bought to the boil.
I added 50g of sugar and a paste made with 25g of Corn flour and water.
This made a thick and quick pie filling.  I only cooked the blueberries for about three minutes.  Then you bake your Pie for as long as you can wait, or until it is golden.
Then you have to serve it with about a pint of cream! 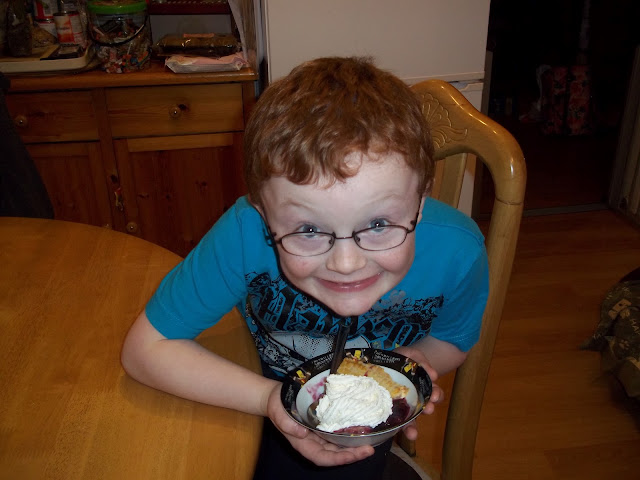