Where has the week gone? Thank goodness it is Friday! 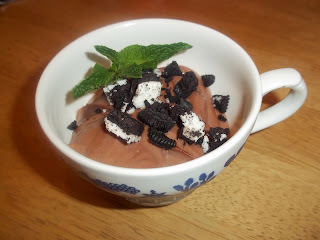 I do not really know where the week has gone.  It has been just an ordinary week in 'Paradise'.  I have still been trying to stay on the Weight Watchers plan but the weight loss has really slowed right down.  I have not been swimming.  I have been dog walking and for a weekly bike ride though.  I am trying to keep the diet interesting by trying as many new recipes as I can.  This week I decided to open my 'Weight Watchers' book at random and make whatever was on the page.  Ha, as luck would have it, I landed on the 'chocolate' page.  Oh how lucky was that.  I decided to make these little 'Chocolate Mint Pots' complete with fresh mint sprig garnish.  They were topped with chopped Oreo's.  I made them and left them in the fridge to set while I went and walked the dog.  I took the dogs frisbee which she loves but is getting a bit old for.  I accidently chucked it into the middle of a thick bramble bush, much to her dismay.  I spent half the walk finding a big long stick to 'Hook a duck' style retrieve her beloved.  She treated me like a hero when I got it back.  I went home to dinner and the 'Chocolate Mint Pot' dessert.  Well it was gross!  Yuk.  Bleurghh!  In the bin!  What a disappointment when a recipe fails to hit the spot.  I scoffed three Oreo's instead!  I would like to hear about other peoples 'cooking' disasters to make me feel better.
I have had a horrible 'Hot head cold' for the last couple of days that I have bombarded with medication.  I have kept myself going and went to feed the ducks before dropping Euan at school this morning.  We saw a Crested Grebe and we couldn't quite believe how long it stays completely submerged for.  We also saw ducks, Swans and cygnets, a baby Moorhen and a very hungry, huge Carp.  Straight after the school drop off I went shopping.  I came home put all the shopping away and then when I was coming downstairs I don't know what happened, I didn't trip, but crikey Mikey, I hurt my toe!  It is now a wonderful shade of deepest purple!  I am coming to the conclusion I am somewhat accident prone!
Henry has applied for a 'Part time' job to start in November.  Fingers crossed he will get an interview. It is at a new 'Children's Soft Play Centre' that is opening in the town.  It will be enormous.  There will also be a children's F1 racetrack.  Euan can't wait for the place to open.  To meet the application deadline I helped Henry with his CV.  He put down Cooking as one of his interests!  I pointed out 'Crisp and cheese toasted sandwiches' is not exactly what most people call cooking, he pointed out he can also make 'Instant Noodles'.  Tonight I pinned both boys down to make homemade burgers from scratch.  I am worried Henry will leave home without the thrifty skills to take care of himself, so I intend to give him a cookery course over the next few years.  They both enjoyed burger making, once they got over getting their hands dirty!  Euan made plain burgers and Henry added Chilli to his. 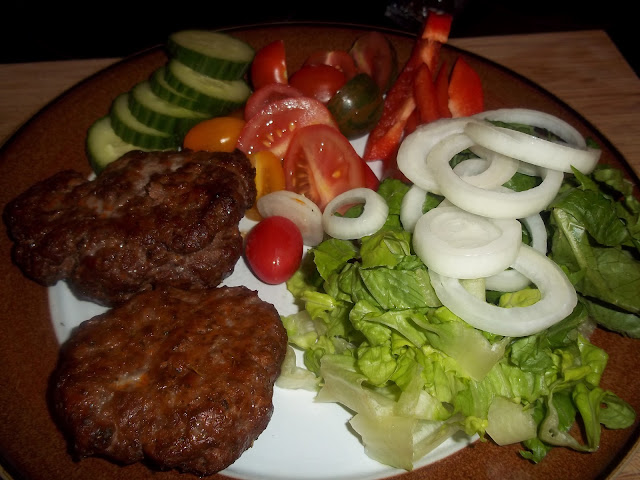 They were pretty impressive burgers.  Henry actually liked his a lot.  Euan did not like his but would make them again for other people.  I liked both.  I wouldn't dream of telling Euan but Henry's were the nicest.

Method
Modge about a bit with your hands, elbow deep until all ingredients are thoroughly mixed, making lots of ewwww, yuk!  urghhh!  Noises as you do so.  Shape into burgers and squabble about who is putting what on which plate to chill them in the fridge for half an hour.  Walk the dog!  Come home again and pop the burgers under the grill.  Grill for 4-5 minutes each side...we do not like medium or rare meat!  While the burgers are grilling get every condiment and pickle known to man, out of the cupboard and adorn your burger bun or 'naan bread'.  (Euan wanted a 'Naan Bread' burger).  Get copious amounts of burger cheese and build a burger bun or if you are Weight Watchery just serve two hefty burgers with lots of salad, minus the bread.