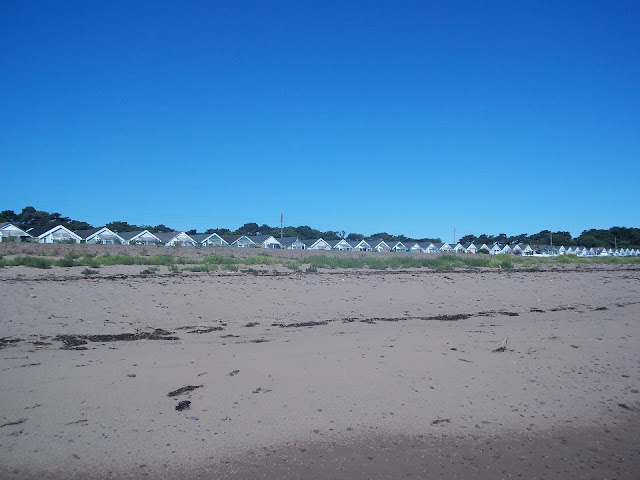 Wow, blue sky.  After the deluge of rain this Summer our journey to Somerset 'Land of the Summer People' culminated in the discovery of blue sky and hot sunshine.  Our destination was Dunster Beach.  It was a journey of nostalgia and familiarity for me.  Every year my family had a tradition of going to Dunster Beach for their annual holiday.  Long before I was even thought of.  My grandparents and Aunts and Uncles would have 'chalets' each and holiday together.  Then as a child every year it was the destination of our annual one week Summer Holiday.  Every year I would be so excited to get there and the three hour journey seemed like an eternity.  The week meant freedom, fresh air, the seaside and making holiday friends.  One year eleven members of my family booked the same week and then three more came to join us.  They were happy times.  Digging sand castles, flying kites, collecting shells, skimming stones, playing 'French Cricket on the beach, games on the putting green and lots of other activities.  I was always very sad to be going home and would often sob in the back seat of the car.  I have taken my boys on some crazy 'adventures' but never to Dunster Beach.  This year it had to be done.  We were blessed with glorious Summer weather for the entire week. 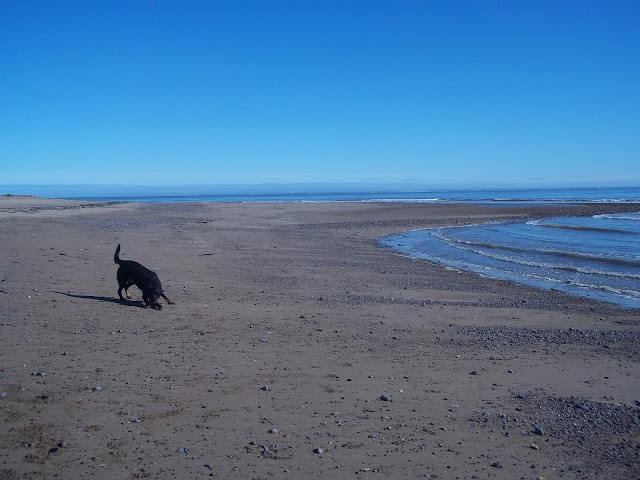 It made one dog very happy.  She made it her mission to clear the beach of 'Birdies', she enjoyed chasing the gulls and water waders. 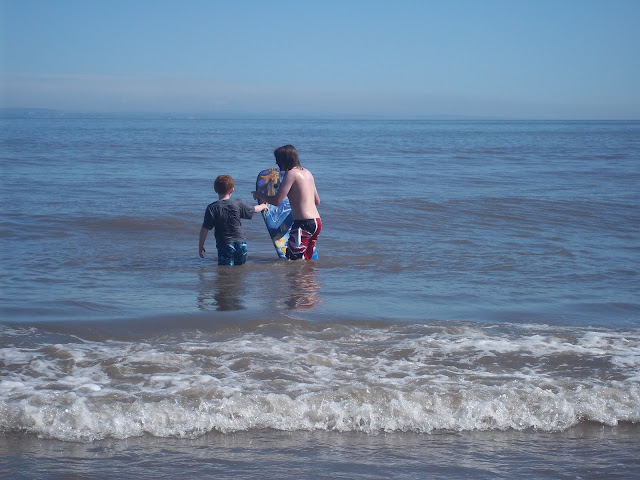 It also made two boys very happy (for most of the time)!  They enjoyed the sea and sand. 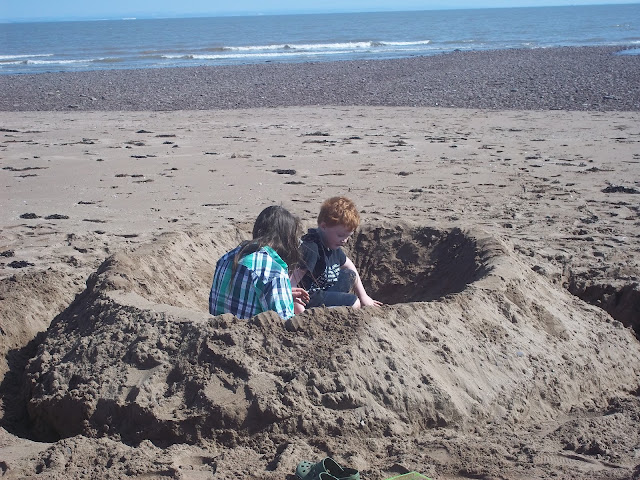 Every year 'hole' digging took up a large proportion of our time as children.  It had to be done this year.  One morning at about 7.30am, Euan and I set to work on our 'Fort'.  I still have the blister to show for it!  He went and got his brother out of bed at about 8.30 to come and join us.  We had a fort with a moat and were all ready to do battle and defend our fort when the tide came in.  Ahem, their was just one problem. . .we waited and waited and shrieked and shouted as the tide got closer and closer.  It filled a channel that lead to our moat and then. . . epic fail on my behalf. . . the tide turned and went out again!  Doh!  It came so near yet so far to our fort!  I needed my brother who is the 'Dunster Beach Hole Digging Expert'. 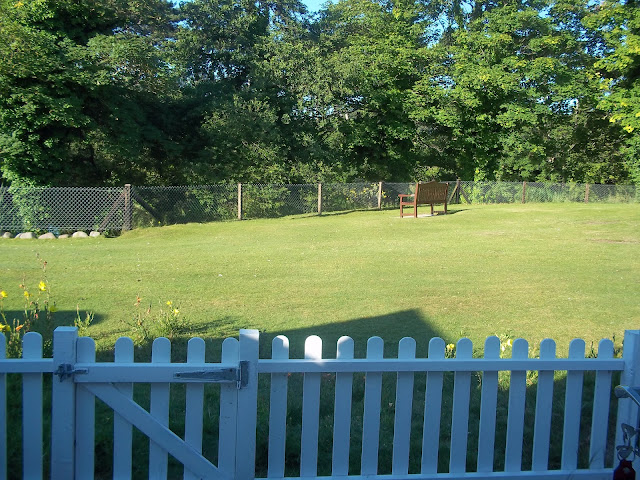 This was the view out of the back of our chalet.  I am a little disappointed in myself for not taking more photographs, but I have had bad experiences with sand and cameras in the past so I did not carry my camera with me much.  Just over the fence is a lovely lake and we had ducks, coots and geese parading past our chalet daily and providing much entertainment for myself.  Coots are hilarious and quite like chickens in their manner.  The lake is teeming with fish, carp and trout.  There are some ancient whoppers and hundreds of young fish.  Fish feeding and duck feeding has always been a big part of my 'Dunster' holidays.  I was worried I would drop my camera in the lake so I didn't take the camera fish feeding either.  My parents had a chalet too, far enough away to get some respite from us!  One evening me and my Mom were fish feeding while my Dad was with the boys, we were lucky enough to spot a Kingfisher twice.  That was a treat. 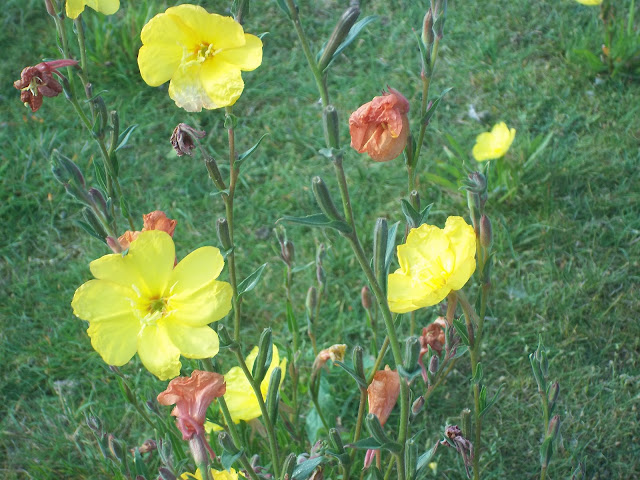 Also right outside the chalet were clumps of 'Evening Primrose'.  They stay closed during the day and open up at night.  I was up early every morning thanks to my 'sofa bed' so I managed to snap these before they closed.  The boys slept in bunk beds as the chalets are rather small, Henry had the top bunk that had a dodgey broken ladder. . . he offered to swap beds with me to relieve me of my solid sofa bed, very chivalrous of him but I have more chance of moving a mountain than mounting a top bunk with a dodgey ladder.  After camping and Yurting I found a chalet pretty luxurious, we had running water, electricity, a cooker and a loo!  There was even a TV which I had to switch off and police to insist the boys went and found other things to do.  Now I hate to complain. . .but. . . it was awfully bloomin hot!  Every day it was boiling and us redheads do not fair well in scorching sun, even with our factor 50 suncream.  There was nothing to be done but give in during the day and just chill out around the beach and chalet, it was much too hot for day trips with a large black dog.  It would have been dreadful to travel with her in the car.  She is a good dog and likes the car but not in the heat.  It was a relaxing, non eventful week of mucking about.  I did take the boys to the 'Arcades' a couple of times and Euan has to be the luckiest, jammiest person in arcades.

He actually wins and comes out with more than he went in with.  Henry takes after his mother and blows his money and has nothing to show for it! 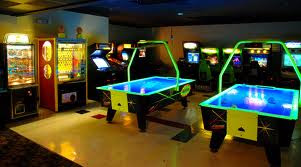 I had forgotten how much fun 'Air Hockey' is and when playing my sixteen year old I am actually pretty competitive!  He won though!
I am dreading Weight Watchers weigh in.  I had to have Cream Teas, yep plural, I had to have fish and chips's, yep plural, I had a delicious 'Ploughman's Lunch' with pickles and huge chunks of Somerset cheese and bread. . .in fact I am thinking of retraining as a Ploughman just for the lunches!  I also had to have an ice cream. . . yep I was good I had just the one!   I had a fantabulous time, so much so I want to book again and pay my deposit for next year!
The chickens were delighted to see me.  They were two eggs each day that I was away.  Then on my return there has been three eggs a day again!  My partner also had to have the TV on for the old Budgie while we were away as he was quiet and lonely.  He kept trying to talk to my partner in the evening but I know my partner would not have chatted back as much as I do!   Maybe I should consider a 'travel cage' for next time and the budgie can come on his holibobs too?  The garden is in need of much attention and today I noticed that our large freezer had somehow got turned off while we were away.  It was full and everything was ruined!  Gah!  Never mind I will have to get creative and get it full again.  I did manage some crochet while we were away but it is not very worthy of a show and tell just yet.  I am glad to be back, with the washing machine on overtime, the internet. . . Blogland. . . my bed. . . and my feathered buddies.  Home Sweet Home!
Posted by Inthesky at 22:50