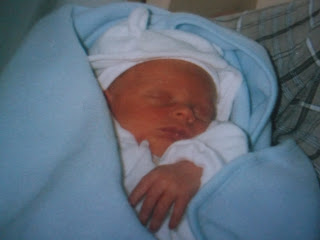 This is my little July 10th Baby!  Not bad as my due date was September the 4th.  Yes this little fella was in a rush to come in to the world and he has not stopped since, 8yrs old!  Where does the time go?  His early arrival was quite a shock but somehow we were ready for him.  I can remember my partner telling me something particularly funny (I can't remember what) I laughed so hard my waters broke!   Then it suddenly was not funny anymore!  I was 'blue lighted' in the back of an ambulance to a hospital 20 miles away.  It takes me about half an hour to drive there, it took the ambulance crew about 10 minutes.  Euan's birth was about as pleasant and trouble free as birth can be.  He spent three days in 'Special Care'.  He was 5lb 2oz.  Quite a good size for a prem baby.  I will always be incredibly grateful for the 'charity knits' that were available at the hospital, tiny hats and woolly cardigans that looked like they were made for garden gnomes.  That is another debt I really should repay.  I must knit some tiny baby things to donate to the hospital.  Trouble is I will get broodier than my hens and we don't want that do we?  Babies seriously interfere with crafting time!
It is very tricky dressing a tiny baby, nothing fits them.  Early babies have trouble maintaining their temperature so woollies are essential.   He was tube fed for a couple of days until he was strong enough to suck his bottle.  Then boy oh boy did he love his bottle.  At six days old he was taken to Birmingham Children's Hospital to have a Plaster cast for his 'Club Foot' this was from his toes to his thigh.  This again was a challenge.  His Dad and my brother had to take him to hospital as I got rushed back in to hospital with a 'Pulmonary Embolism'.  His Dad had to take care of the new tiny baby and my parents had Henry while I was hospitalised for a week.  I then had three months of blood tests and blood thinning treatment!  Euan needed his plaster cast changed each week.  We had to soak it and remove it at home and then drive to Birmingham to get a new one put on.  I don't know how we did it.  It was very stressful at the time.  It all seems like a very long time ago thankfully.   It is amazing what you can cope with if you have to.  He had casts and boots on a bar until he was four.   At the Children's Hospital I would often think if all the parents could put there troubles in a heap, I would happily take my own troubles back, they were slight compared to most.   He had his first Op at 10 weeks old.  I will have to sort out some photographs and tell the story of his foot, I like to think telling the story might help somebody somewhere.  He has had three or four operations to date and spent his 6th Birthday in Hospital as his last operation (to literally move muscles and tendons) was the day before his birthday.  Credit to the Nursing staff, Euan remembers the whole things as a great experience.  He had fun.  He is now one of the youngest in his class at school but one of the biggest.  He has caught up well.  The foot is also all good for now.
His older brother has his Birthday on the 15th of July and when I was expecting he kept asking 'Will his birthday be after mine?  His birthday will be after mine won't it?'  He has not quite forgiven him for getting in there first.  We gave Henry the chance to pick a 'Middle' name for his brother, he wanted to choose 'God', 'Cool Boy' or 'Ganesh' needless to say Euan has no middle name!  Sadly Euan is off school with a horrible cough.  (He was determined to get out of 'Sports Day' somehow, even if it meant getting ill)!  His Daddy has the day of work tomorrow so it will be a 'lads' day.  I am hoping to see Euan open presents before I go to work. . . I will be sad if I miss him!    I know there are plans for a manly, cooked breakfast.  My parents will come for tea when I get home from work.  There will be Birthday cake and balloons.
Now on with 'The Tour De Fleece', Euan and I have been drum carding tonight to make batts of Merino.  He loves drum carding with a passion and behaves like he is my boss telling me what to do and what not to do.  I used some scrap fibre and some Merino that was a dye experiment that went wrong.  You can read about my Adventures in Dyeing Here. 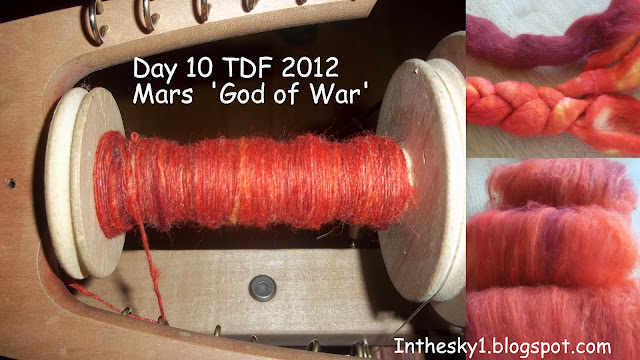