Spinning Shropshire Fleece and other stories... 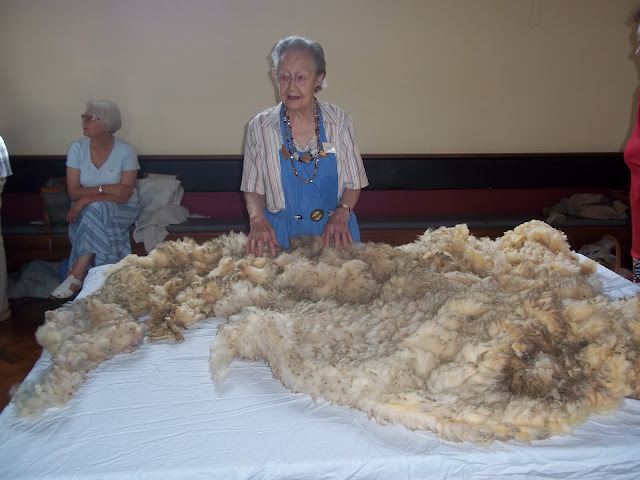 Do you remember in September me showing you this photograph of our Weaving Spinning and Dyeing Guilds meeting.  This is Evelyn, an incredibly skilled and knowledgeable spinner demonstrating how to skirt a fleece in preparation for spinning.  Skirting is the term used for sorting the raw unwashed fleece into that which is worth washing and spinning and that which is better off being put on the compost heap.  This is a Shropshire fleece. 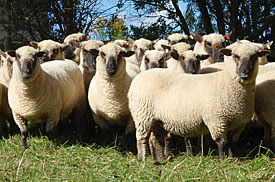 As a Guild we are preparing for the Six Guilds Exhibition in September 2013.  I have never been to a Six Guilds Exhibition before...I think they take place every three to five years.  Our task as a guild is to spin and create a collaborative project using only Shropshire fleece.  The fleece has now been washed.  At our Annual Exhibition it was carded and my Mom and I have a chunk of it, actually a shopping bag size full of it each to spin in its natural colour.  It is a nice fleece to work with.  It has a springy texture and I really do not know how to describe it as it is coarse but soft at the same time soft and airy.  It is not as soft as Merino but not as coarse as Hebridean.  I think I would wear it but not directly next to my skin.  This particular fleece is rather a labour of love though. 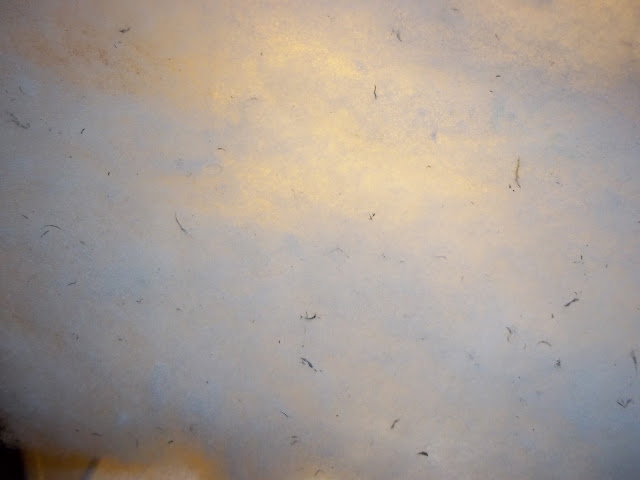 I have oiled my wheel and lightly oiled the fleece too but look!  Oh dear it has rather a lot of VM (Vegetable Matter) embedded into the fibres.  It is clean!  For my first couple of sessions spinning it I was spending more time picking bits out than spinning.  I find that quite a chore and an irritating task.  Spin a bit, pick pick pick, spin a bit more pick pick pick pick...you catch my drift!  Seriously if this fleece was mine I would have abandoned it. 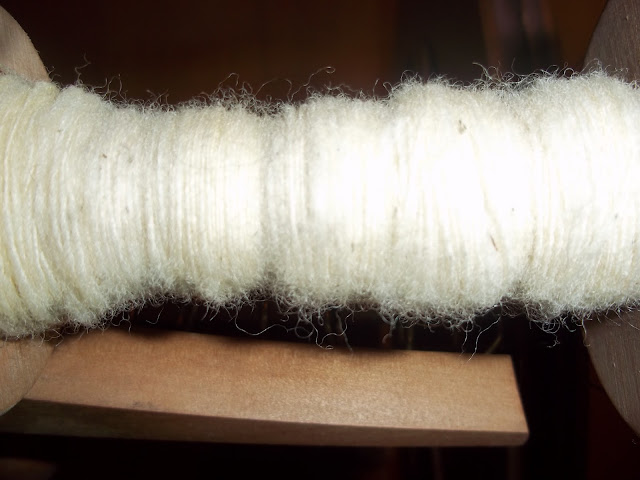 The resulting singles looks like a little white dog with fleas!  Nice eh?  So I have had a bit of a dilemma.  I have decided to just try my best and get it spun without worrying too much about it.  The end project is not going to be a garment it is going to be an 'Art Piece'.  I just worry in a collaborative project that I will be letting someone down.  Really though I do not have the personality type to cope with hours and hours of pick pick picking!  It is rather like counting grains of sand.  I did find some commercially prepared Shropshire 'tops' to buy but decided that would be cheating!  I will plod on and keep that in mind as a back up plan if the resulting yarn is too disappointing.  I love it's fuzziness.  If I could have fuzzy without the bits it would be perfect.
I have also been 'Corking' some of my handspun.  I have corked myself into oblivion!  Let me tell you corking this particular handspun is not for the faint hearted. 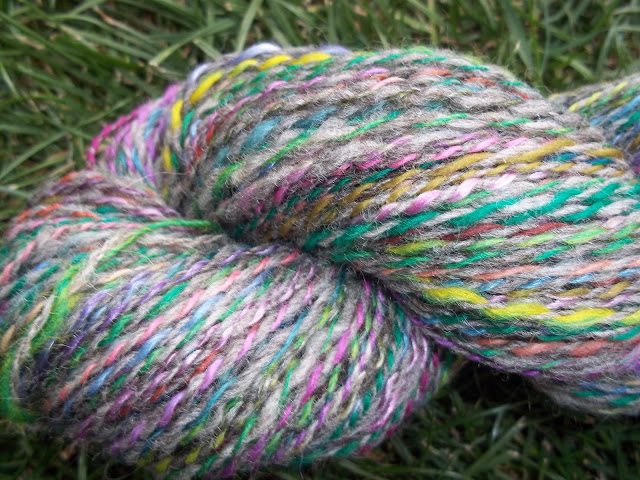 This yarn I called 'Rainbow Scrappy Beard'.  It is two ply.  I spun one bobbin of commercial scrap fibres; 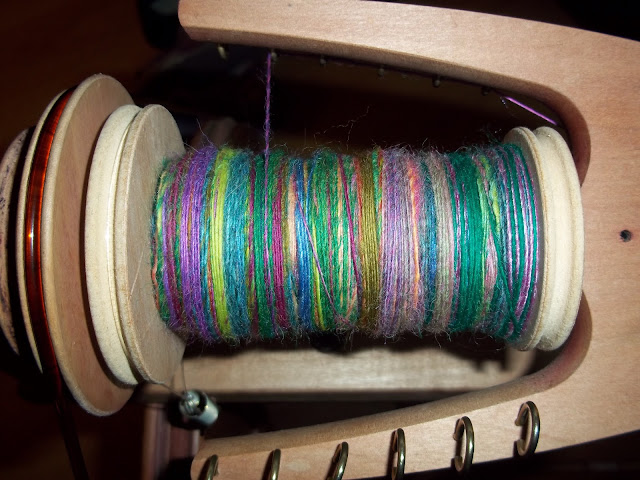 and one bobbin of 'Old Man's Beard' a fleece from an old work mate who rears sheep for meat.  They are crossbreed 'mules' and he was previously burning the fleece. 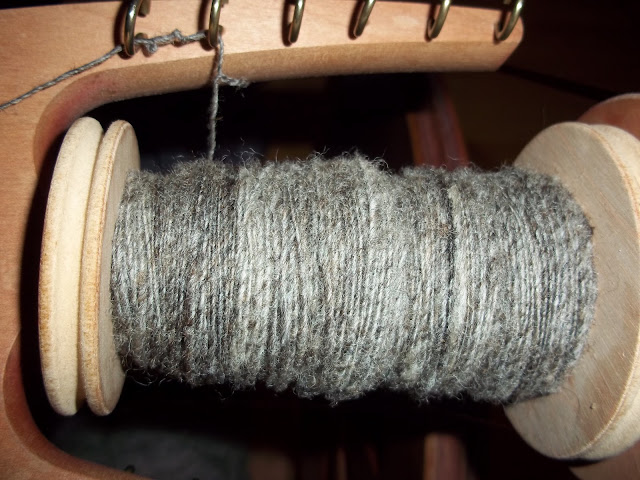 I spun this in 2011.  I like the yarn and now it has been washed it is nice and soft.  I love the colours as I am corking.  Small things please small minds and all that!  I only have one skein of this yarn but I really wish I had enough to make a cardigan. 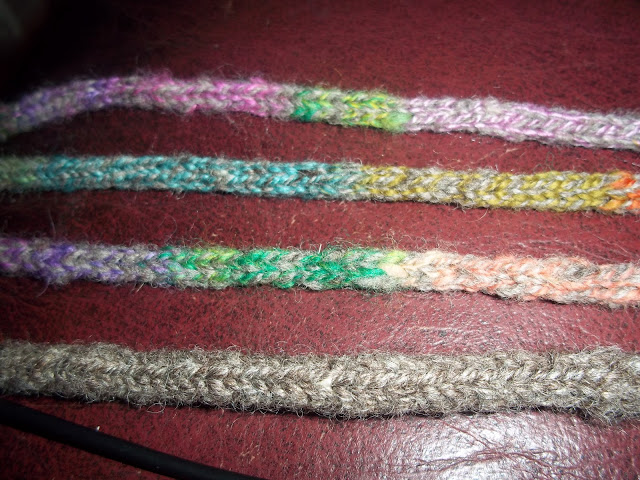 Today has been incredibly blustery and wet.  The garden is turning into a swamp but it does not stop the chickens from having fun.  Lavender is still broody and only getting off the nest if I pick her up.  She is a lovely girl and this broodiness is a nuisance now.  I feel sorry for her.  She had a brief run around in the wind and drizzle today before returning to her imaginary duties. 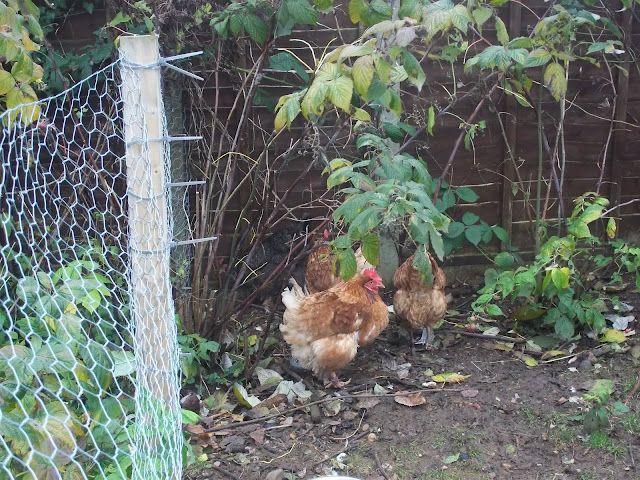 You can play spot the chicken here as there are actually four in this picture.  The wind was so strong they were actually getting caught off guard and blown along the garden with their feathers all puffed up.  They have found a sheltered spot here.  It was funny to watch because they looked like 'old ladies' getting pushed at a Bus Stop and the noise they made as they got blown along sounded like how I imagine an old ladies getting pushed at a bus stop would sound.  The chickens would still rather be out running around in the elements than cooped up though.
XXX
Posted by Inthesky at 22:05