Trauma in the Coop! My Poor Chickie Wicks!  I went to the coop as usual this morning, they normally come bustling out for a chat and are desperate to be let out to run around doing what chickens do all day.  Today was a different matter.  They appeared petrified to see me and squawked, flapping madly, hitting the ceiling of their coop.  I tried to calm them down with my voice but that just seemed to make them even more frantic.  I noticed quite a pile of freshly scraped soil by their coop door and a rubber mat we have there was turned over.  I set to work straightening it all before I took this photograph, that looks like 'Fox' scrape marks to me! 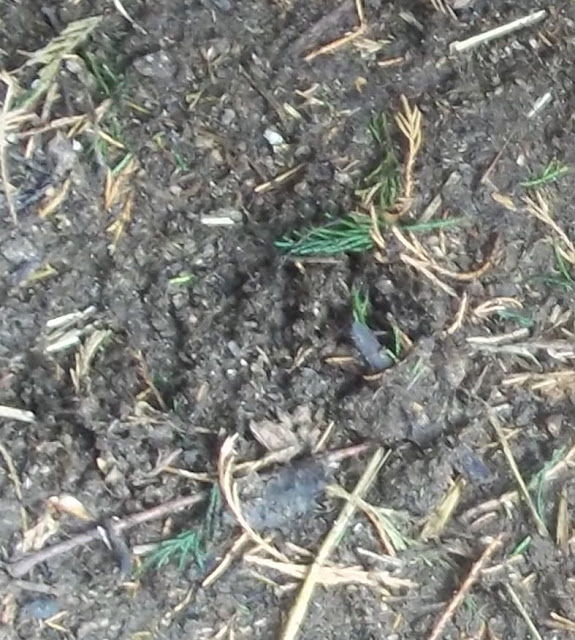 Now I am no expert but they do look like scrape marks and something had been causing a commotion up there, what do you think?  Two of the girls were flapping around making terrified clucks.  When angry or scared chickens can also make a low 'growling' type of noise, they were doing that this morning.  The more timid of the three has just retreated into the nest box with her face to the wall she does not want to move. 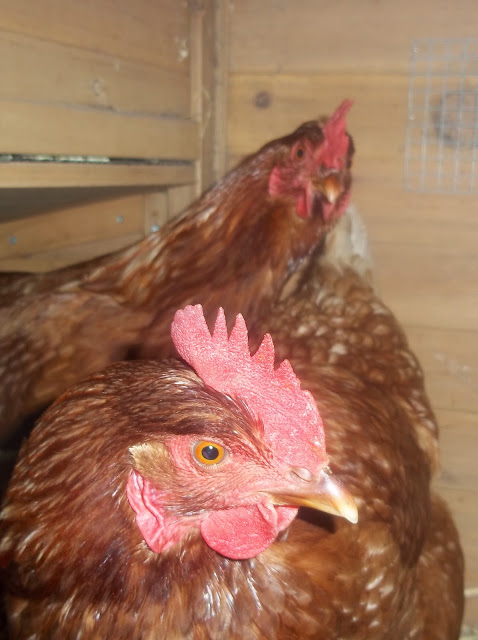 I opened all the doors on the coop and spoke in a calm and upbeat manner, but they are not having it!  There is no way they can be coaxed out today.  The poor things look like they are having a nervous breakdown.
They have undoubtedly had quite a traumatic experience.  I am already down to two eggs each day now, I do not know what has happened to the third egg!  I did say to the chickens last week 'Someone will be for the pot if you keep laying two eggs a day'!  The next morning I had three eggs.  Then we have gone back to two again.  Euan was very cross with me for telling them that!  he says they are like sisters to him!  Trauma effects laying so I had two eggs this morning but I am not expecting any tomorrow.  They have stopped laying in the past as a result of a large and loud thunderstorm and they have stopped laying twice last year when I went away and left my Other Half in charge!   Never have these Chicken babies appeared frightened of me before, they even let me bath and blow dry them and chat away quite happily.  It is sad to see them so neurotic, especially as I can't seem to make it better. 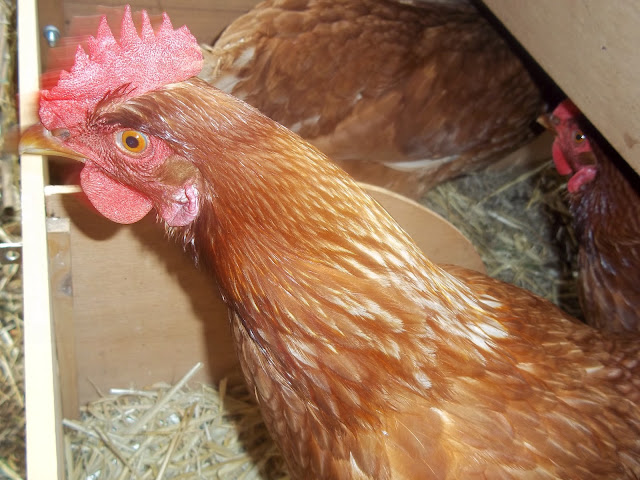 Do they look terrified to you?  They do to me.  I have been up there this afternoon with a large can of corn kernels.  While they still don't want to come out to play, they gobble the corn and it seemed to help them to temporarily forget their troubles.  Poor poor girls, these are the chickens that like to play in the snow, the rain and whatever else the elements throw at them.  Not today.  Euan has asked for his own alarm clock so he can set it to wake him to go and check on them in the night!  I will be making some kind of barricade tonight and hoping for the best.  I will probably stack up flower pots that will hopefully fall and startle a fox.  It is the time of year for hungry fox cubs.  My Other half has a day off work tomorrow he said he will make the fences safer, two of my neighbours either side lost fences last week in the gales, we managed to fix ours the same day, the neighbours still haven't so we think the fox is able to get through the back gardens where previously it couldn't.  I have worried all day!  I think I will be sleeping with one eye open tonight!  I bet the poor chickens won't sleep at all!
Posted by Inthesky at 14:23